Introduction: Overview of my week

Another week, another blog post, I would suppose. It’s hard to sum up this week in one sentence, so instead I’ll divide it into regions for this simple overview.

So, after having a pretty clear goal to meet specified by the RFC, time to get things moving. I started with what I thought would be low hanging fruit: Reading the registers of another process. It ended up being more difficult than I thought, but it ended up being really interesting and I want to share it with you :)

Quick note: You can follow along in the final commit here, but don’t worry if this is confusing.

I quickly implemented the scaffholding for this feature: A proc: scheme as specified by the RFC. I will not go into details as to how schemes work, as I published an article on that last year on dev.to. Then it was time to brainstorm how the actual reading was going to take place:

Perhaps the most obvious idea would be to somehow attach to the process, read its registers, then detach. There are a lot of holes in this idea however. For starters, attaching to a process will start running whatever code the process was stopped at and not my own code. Also, it’s difficult, if not impossible, to store all registers without modifying any of them considering all compiled code ends up converting variables to registers.

My second idea was based on somewhat of a misunderstanding how processes switches work. Basically, the way a kernel runs multiple programs seemingly in paralell using one single CPU thread is through “context switches”. It stores the state of each process/“context” by storing all its registers. To run one of these “contexts”, it loads the registers, on x86_64 this is most notably the RBP and RSP registers as seen here. The RSP controls where in memory the push/pop assembly instructions should read/write, and the RBP points to the current function, and can be used to get function arguments as well as the address of the parent function which will be returned to with the ret instruction. Before running a process the kernel tells the CPU to enter “user mode” and therefore discard a bunch of privileges. It also tells the CPU to send an “interrupt” (sort of like a kernel event) after a specified duration and switch to another context.

Anyway, as I was saying, my second idea was based on this. I thought I could just get all registers from the context switching mechanism, right? Well at the point of each switch, a LOT of kernel code has probably ran, and many general-purpose registers might have changed values since of course the kernel is also turned into assembly. But I wasn’t completely off the track: Since system calls aren’t supposed to change any registers other than RAX (the return value), the original register values must be available somewhere, which is when a friend helped me discover the interrupt mechanism. This code pushes all the registers to the stack before running an interrupt, and pops them later. This is to preserve their values. Now, theoretically, if I were to save this pointer, I could not only read their saved user-assigned values, but also change the values they will later restore to! This is what I did.

1. After timeout and a context switch happens, simply save the pointer to the structure in stack that contains all our desired values.

2. When a syscall happens, do the same. This ended up breaking EVERYTHING, mostly erroring about “No such process” and stuff.

3. I found this suspicious code:

Turns out, that through some hackery this is called by the child process after clone, and is responsible for returning 0. My syscall setup had broken this, so I had to fix it. I’m still not entirely sure how it works, and I pretty much swear this is the very first thing I tried, but somehow using the new stack restoration system ended up being the thing that worked after a day of work. 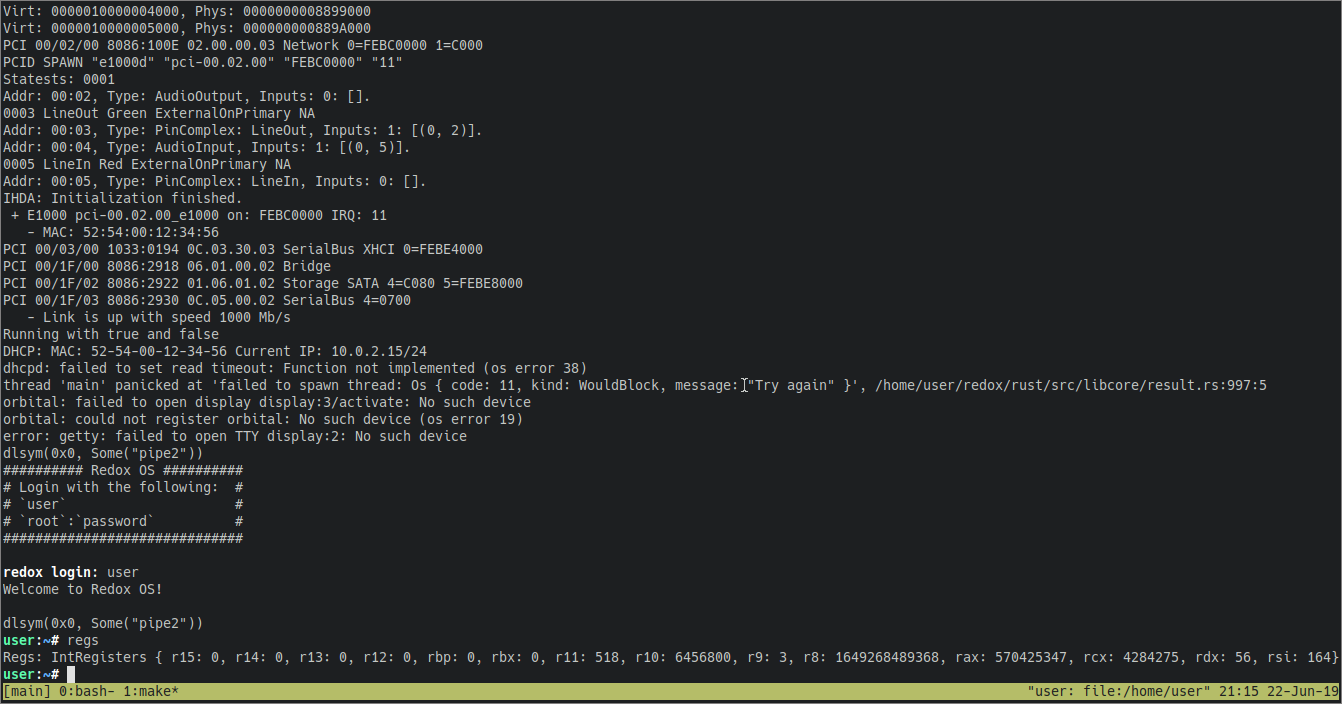 The regs command is a simple test command I wrote:

What I noticed is that both ion and login were running the system call waitpid, which makes sense. All well-written processes should run some blocking command. I did want to double check another process, so I checked nulld. This is shown in the screenshot. The rax register is holding the value of read, which is exactly what I expected after reading the nulld code :)